Evaluation of the balance of the immune system

Evaluation of the balance of the immune system

Human health is continually tested by external factors such as trauma, biological agents, and chemicals. The immune system helps to counteract these threats, but the passing of the years can compromise its functioning.

The slow decline of the organism’s defenses begins much earlier than one might think. Promoting the balance of the immune system, restoring, if necessary, an anti-inflammatory profile, helps to counteract the onset of degenerative, inflammatory, and cancerous diseases typically associated with advancing age.

IMMUNEBALANCE is the Bioscience Institute test that allows you to capture the signs of aging of the immune defenses at any age, even when you are in apparently good health, for an active prevention of health problems aggravated by the passing of the years.

The immune system is the organism’s natural weapon against disease. The first line of defense is formed by innate immunity cells (such as monocytes and NK cells), which provide non-specific and incomplete, but rapid and indispensable protection while waiting for the so-called acquired immunity (in which are involved T, B lymphocytes and NK cells). Acquired immunity takes longer to respond to health threats, but it is highly specific and permanent.

Acquired immunity cells respond to the inflammatory environment generated by innate immunity. Once their work has been completed, most of these cells die, leaving behind them the so-called memory cells, able to protect the organism quickly and specifically when it is attacked again by the same threat.

Memory lymphocytes can survive for decades. However, the immune system tends to keep the total number of T lymphocytes in the blood almost constant. Consequently, continuous stimulations of the immune system can significantly reduce the space for new lymphocytes and, therefore, the ability to react to new threats. This is what happens, for example, in the presence of chronic viral infections, such as that caused by Cytomegalovirus (CMV).

T lymphocytes are white blood cells that participate in acquired immunity. CD4 + T lymphocytes react to the presence of bacteria, fungi, and viruses by activating and recruiting other immune cells. CD8 + T lymphocytes, on the other hand, recognize and directly kill virus-infected cells and cancer cells.
B lymphocytes, on the other hand, are the immune cells responsible for producing antibodies. They can also play a role in the activation of T lymphocytes and secrete substances capable of modulating inflammation.
Natural Killer (NK) cells can also activate other immune cells and produce molecules that control inflammation. Involved in both innate and acquired immunity, they can destroy virus-infected cells and cancer cells.

Produced in the bone marrow, monocytes circulate in the blood, through which they can reach damaged or infected tissues, and can differentiate into macrophages and dendritic cells.
Once activated, they control inflammation by both promoting and resolving it. They can also incorporate cells or toxic substances to be eliminated.

Vitamin D and the immune system

Vitamin D is a key prohormone to promote the proper functioning of the immune system. Its action is complex and involves both innate and acquired immunity. The result is the promotion of a state of greater tolerogenicity. 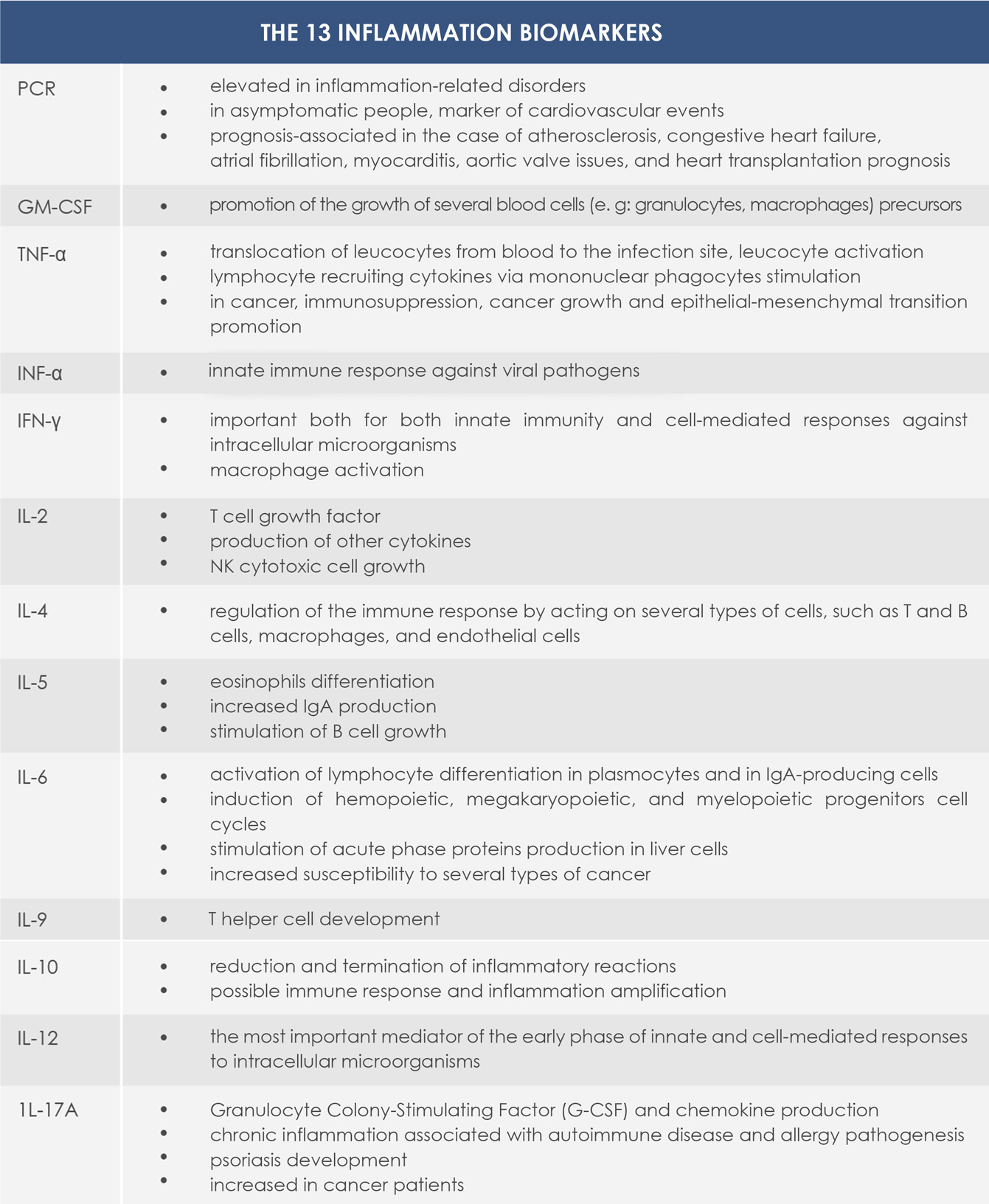 Why evaluate the balance of the immune system?

The aging of the immune system reduces the years of old age in good health, without chronic diseases and disabilities.

Not all people age in the same way. It all depends on the strain the immune system is subjected to throughout life. More importantly, an apparently normal, healthy system could hide variations in immune cell levels that may be the wake-up call for two conditions closely associated with health problems typical of old age: inflammaging and immunosenescence. Evaluating the balance of the immune system allows us to capture its aging before it has significant consequences for health.

The immune system is constantly subjected to stress. As we age, this phenomenon, combined with the effects of years of exposure to oxidative stress, promotes the so-called inflammaging, a low-grade inflammation typical of aging.

Inflammaging is associated with almost all health problems typical of old age, such as cardiometabolic diseases and neurodegenerative diseases. Added to this is the decline in immune defenses – a phenomenon known as immunosenescence associated with increased mortality.
Considered to be one of the mechanisms underlying the link between aging and diseases involving the immune system (such as autoimmune diseases and cancers), immunosenescence impairs the ability to respond to new threats, thus increasing susceptibility to infections. It is also associated with an increase in the production of autoantibodies – hence the tendency to develop autoimmune diseases.

Protective mechanisms activated by exposure to oxidative stress can also become less efficient. The result is the accumulation of senescent, dysfunctional, and mutated cells. The immune response decreases and the risk of cancers and degenerative diseases also increases. The general trend is towards a decrease in both types of immunity (acquired and innate).

With advancing age, the total number of T lymphocytes can significantly decrease. However, even in the absence of significant changes in their levels, the risk of contracting infections or developing diseases typically associated with aging (such as tumors) increases due to the reduction in the space available for new immune cells. In fact, senescent T lymphocytes, more resistant to cell death, tend to accumulate, while the production of new T lymphocytes and their ability to differentiate into mature cells decreases.
Both T lymphocyte populations – helper T cells (CD4 +) and cytotoxic T lymphocytes (CD8 +) – can decrease. However, of particular concern is the inversion of the CD4 + / CD8 + ratio, a characteristic of a condition typically associated with aging – the so-called immune risk phenotype (IRP) – considered an indicator of an increased health risk. Indeed, high percentages of CD8 + T cells, combined with low levels of CD4 + T cells and poor proliferation of T cells in peripheral blood, are associated with a significant increase in mortality in the elderly population.
The CD4 + / CD8 + ratio can also be altered by viral infections, including Cytomegalovirus (CMV) infections. In fact, being positive for CMV is one of the most important causes of aging of the immune system. The virus, which remains in the body for life after the first infection, chronically stimulates CD8 + T lymphocytes, promoting their increase. As a result, CD4 + T lymphocytes decrease. Although a large part of the adult population is positive for CMV, few are aware of it. Analysis of the CD4 + / CD8 + ratio can provide significant information on the state of the immune system, revealing unsuspected compromises.

Levels of B lymphocytes vary significantly throughout life. Immediately after birth, their total number doubles, and then remain stable until the age of 2, when it begins to gradually decrease to the typical values of adulthood. From this moment their levels stabilize until, with aging, the production of B lymphocytes in the bone marrow decreases significantly. In particular, chronic inflammation associated with aging can inhibit the production of new B lymphocytes.

In healthy people, about 95% of monocytes are represented by the “classic” form, characterized by a high expression of the CD14 marker and the absence of the expression of the CD16 marker (CD14++ CD16-). From the age of 50, however, the subpopulation of “non-classical” CD14+ CD16+ monocytes begin to increase. At the same time, however, their functionality decreases, while their ability to produce proinflammatory molecules increases.

After the age of 60, the reduction of classical monocytes is significant. At more advanced age, non-classical monocytes also decrease, while another subpopulation of CD16+ cells increases, the “intermediate” CD14 ++ CD16+ monocytes. The increase in CD16+ monocyte subpopulations (non-classical and intermediate) correlates with the development of diseases associated with chronic inflammation (such as cardiovascular disease, obesity, diabetes, arthritis and inflammatory bowel diseases). However, this increase can be effectively countered. In the case of obesity, for example, both dietary intervention and bariatric surgery make it possible to reduce the levels of CD16+ monocytes.

Vitamin D deficiencies are associated with increased susceptibility to infections and the prevalence of autoimmune diseases. Conversely, avoiding them promotes a better functioning of the immune system.
Unfortunately, the low availability of food-borne vitamin D, combined with poor production following exposure to sunlight, means that up to 40% of the adult population may find themselves struggling with a deficiency. Aging further increases this risk, bringing with it others: fractures, infections, cardiovascular diseases, diabetic retinopathy, migraines, tumors and frailty.
Supplements is an effective strategy to correct these deficiencies and promote the proper functioning of the immune system. The daily intake of vitamin D, for example, has been associated with protection from acute respiratory infections

IMMUNEBALANCE is recommended for anyone who wants to capture the signs of aging, for an active prevention of health problems aggravated by the passing of the years.

The test can be done at any age, regardless of your health In fact, even a state of apparent well-being could hide alterations in the balance of the immune system associated with an increase in risks to one’s health.

The IMMUNEBALANCE test requires a simple blood sampling in which the immune cells and vitamin D levels are assessed. The samples are sent to the Bioscience Institute laboratories, where they are processed and analyzed.

The results of the analyses are provided in the form of a report in which any conditions of imbalance are highlighted. The report does not in any case constitute a diagnosis of the disease, but can help, under the guidance of a doctor, to implement strategies to promote healthy aging by capturing alterations in the balance of the immune defenses. 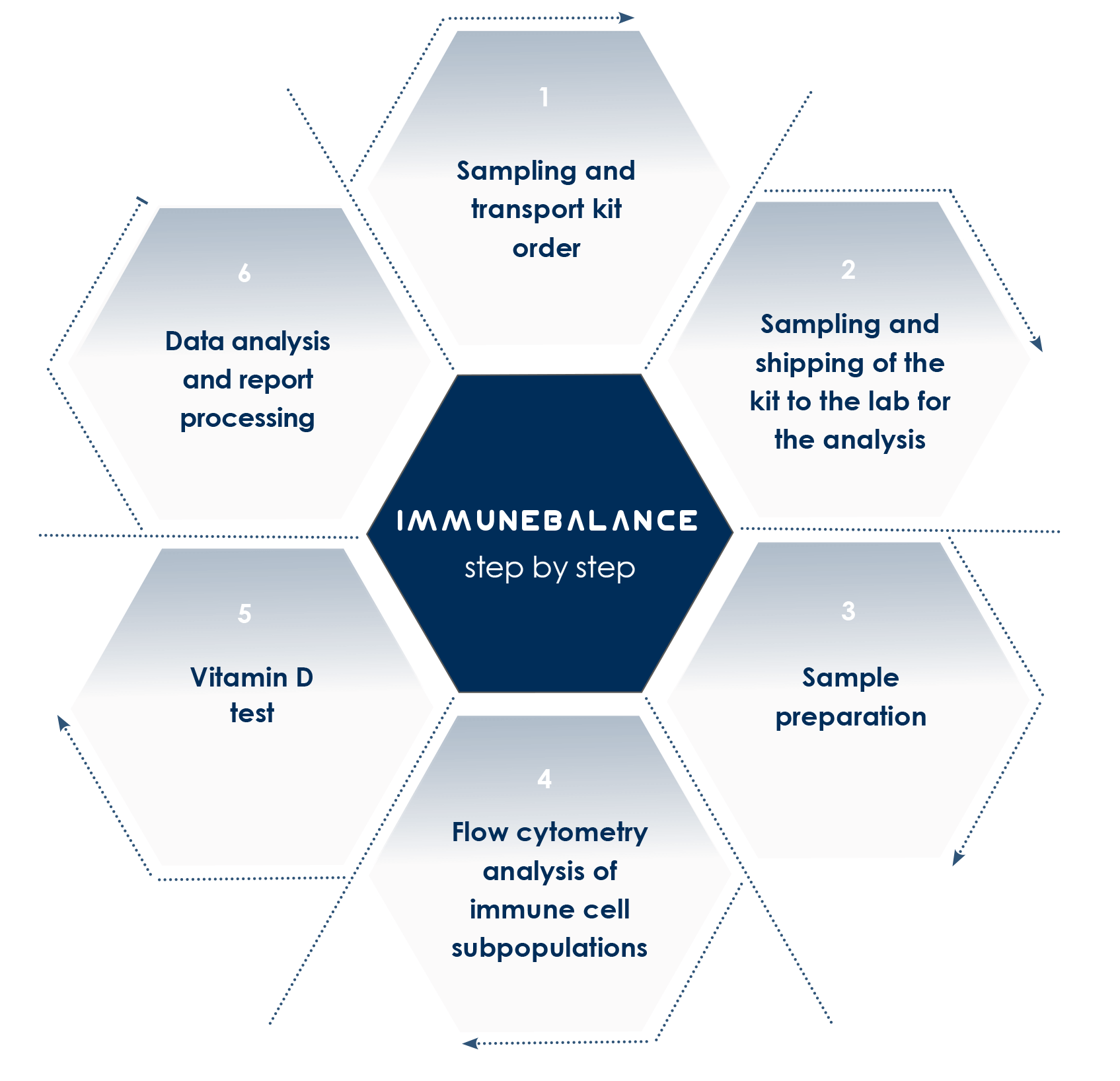 Request more information on how to undergo the IMMUNEBALANCE test. By assessing the balance of your immune defenses, you can reduce the risk factors for the development of diseases associated with aging.

Email info@bioinst.com or fill out the form below to be contacted, without any commitment on your part, by one of our experts.