Human DNA is crumpled into compacted units called chromosomes. The telomere is the repetitive DNA-protein complex that protects each end of a chromosome. This specialized capping structure avoids both chromosome end recognition as a site of DNA damage and chromosome end fusion.

TELOBALANCE is Bioscience Institute’s telomere length monitoring program that enables detecting shortened or longer telomeres, and evaluating the activation of telomerase (the enzyme responsible for telomere length maintenance) in healthy individuals, well before cancer development. It allows for intercepting conditions that can contribute to cancer development, anticipating it and enabling action to counteract it.

Telomeres represent both genomic sacrifice zones which prevent the loss of genomic information at the end of chromosomes and high order structures masking chromosome end from being detected as DNA breakage site by the DNA damage response machinery. Also, telomeres regulate gene expression, transcriptionally silencing genes both close to them and/or at long distances. 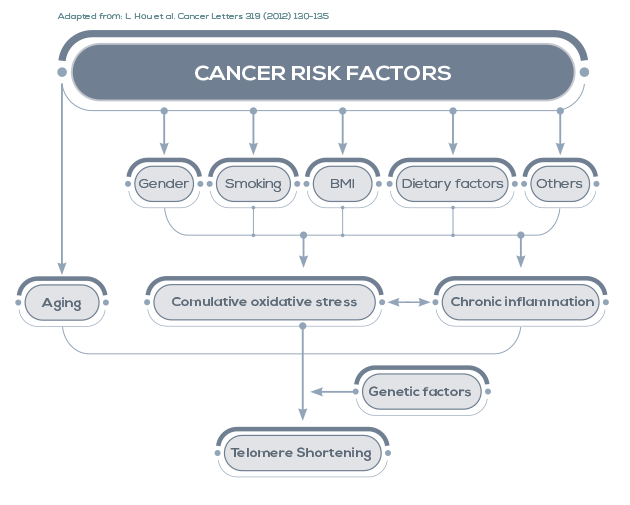 The progressive telomere shortening is particularly dangerous when combined with oncogenic changes such as loss of the function of p53, a protein that stops cell proliferation and induces senescence, or of other cell-cycle regulators. In fact, these changes can bypass the period of replicative senescence imposed by telomere shortening, further promoting telomere attrition. If mechanisms to maintain very short telomeres develop, cancer can arise. In 85-95% of cancers, such mechanisms involve telomerase activation by expression of the hTERT gene.

Maintaining shortened telomeres allows the cell to express specific genes required for cancer progression that would be otherwise silenced. Also, it can promote chromosomal instability, significantly contributing to genomic rearrangements associated with tumorigenesis.

In the majority of cells high genomic instability leads to cell death. However, in rare cells the activation of telomerase enables the generation of transformed cells with a heavily rearranged, stabilized, genome enriched with potentially tumorigenic mutations. It is sufficient telomere loss at individual chromosome ends to wreak havoc on the genome.

Longer telomeres can confer a longevity advantage too. They may be permissive for increased replicative potential of cells acquiring mutations that would otherwise undergo cell death, increasing the opportunities to develop genomic instability, and promoting cancer development.

By intercepting shortened or longer telomeres, it is possible to take action against cancer. In fact, if cells with shortened telomeres gain oncogenic changes, they can continue to divide and develop genomic instability, the principal driver of cancer development. Similarly, longer telomeres may favor a delayed cell senescence, increasing the opportunities to develop genomic instability.

TELOBALANCE is a telomere length monitoring program suitable for anyone wishing to counteract cancer development by intercepting cancer driver conditions.

Given the association between telomere dysfunction not only with aging but also with smoking, dietary factors, body mass index, and other factors promoting oxidative stress and chronic inflammation, it is recommended to people of every age, for an active prevention of cancer based on the interception of its driving factors.

With TELOBALANCE it is possible to monitor telomere length and telomerase activation by taking a simple blood sample.

The sample will be analyzed by measuring telomere length chromosome by chromosome, by evaluating about 200 telomere length associated variables, and by measuring relative telomerase activity and, if requested, hTERT expression. Outputs include the median and mean telomere length, the percentage of short telomeres, and other parameters that are useful in determining the level of telomere attrition in the cells. The profile obtained does not represent the diagnosis of a pathology but enables, with the advice of qualified experts, the development of strategies to reduce cancer risk and to evaluate the utility of undergoing other tests.

Request more information on how to take the TELOBALANCE test. By monitoring the length of your telomeres and the activation of telomerase in your cells, you can intercept a cancer driver condition and take action against cancer development.

Email info@bioinst.com or fill out the form below to be contacted, without any commitment on your part, by one of our experts.